It’s usual to think about boundaries as being lines on the ground, and this is generally enough for most purposes.  However, it’s important to remember that, for the purposes of boundary law, the boundary of a plot of land will in fact extend down into the soil below the surface and indeed up above the surface.  Occasionally, the line of a boundary doesn’t go straight up and down.   This will be the case, for example, where in a terrace of houses there is a room on the ground floor belonging to one house, and a room above it belonging to the next door house. Boundaries are usually marked by walls, hedges and fences — “boundary marker” is the term often used.  However, landowners are under no obligation to mark their boundaries.

You might think that, since it’s important to be clear about who owns what, boundary law would require boundaries always to be defined precisely.  In fact that isn’t so.  On the contrary, boundaries are usually imprecise. This is partly because (a) usually, nothing much will be happening at a boundary, so knowing its exact position isn’t vital;  and (b) as the years go by, one type of boundary marker may be replaced by another, in a slightly different position.  A wooden fence, for example might collapse, and be replaced by a hedge.   If boundaries were precise, keeping track of the exact line would be difficult and many people would probably not bother to do it.

Deeds
Where a plot of land is not registered, deeds dealing with the sale of the land, and other transactions, will refer to the plot in some way. (And in the case of a plot which is registered, the Land Registry may have copies of deeds relating to the plot.)  But there is  very often a similar tendency, in deeds, towards vagueness. Plans won’t claim to be precise, and written descriptions will often use imprecise wording, for example, referring to a plot “some forty-five feet by ninety feet”.

“Presumptions” are part of boundary law.  They can be used, in the absence of any other evidence, to reach a legal conclusion. They include the following

• Hedges and ditches. The presumption is that a landowner would have dug a ditch right on the boundary of their land, then piled the soil next to the ditch on their own land. (Not on the neighbour’s land.) Finally, they would have planted a hedge on top of the bank of soil. The boundary is thus the far side of the ditch, not the hedge.

• Walls. The presumption is that whoever built the wall, built it right on the edge of their land. So the outward face of the wall is on the boundary.

• Fences. Where a fence has support posts on one side, the presumption is that the supports are on the land of the person who put up the fence, and that the other side of the fence is on the boundary.

Sometimes, plans drawn up by developers show small T-marks along boundaries, the aim being to identify which landowner is responsible for maintaining the boundary marker.  These have no legal effect in themselves, though they may amount to a proposal which neighbouring landowners can adopt if they wish.

Boundary disputes can involve lengthy and complicated investigations into the history of the two plots of land  involved. The further back in time you go, the harder it will be to establish what actually happened. The courts, in dealing with cases involving boundary law , often express concern about huge legal costs which have built up in cases involving tiny amounts of land.  In short, litigation should be regarded as a last resort.Many firms of surveyors and lawyers offer professional assistance in establishing where a boundary lies. Ideally, they should be instructed jointly by both landowners, to assist in establishing the boundary.

Boundary agreements
With or without professional help, the two landowners can agree between themselves where the boundary lies, and put that agreement in writing, with a suitable plan. The law says that transferring land generally requires a deed. But the presumption is that a boundary agreement does not transfer any land: it just records where the boundary has always been. (If it later turns out that the agreed line is not where the boundary has always been, then the landowner who has lost land — usually just a narrow strip, of course — has a legal obligation to transfer
it to their neighbour.)

The Land Registry can record a boundary agreement on the Land Register, so that a buyer or some other interested party will be aware of it. Hopefully, they will see the wisdom of abiding by it.  But showing the agreement on the Register doesn’t affect the legal position of the boundary.  A later owner could still argue that the true boundary line was different, if they had if they had evidence to that effect.

Determined boundaries
Boundary law offers a more formal step, namely applying to the Land Registry for a “determined boundary”. A determined boundary is shown on the Land Registry plan and is, legally, the precise boundary. There are detailed requirements to be complied with: professional help will be needed.  The procedure is not meant to be used as a way of resolving disputes.  It is for anyone with a registered title who wants to be precise about the boundary of their land. It’s probably used mostly for land in high-value places, like city centres, where it’s important to prevent encroachment.  In other cases, a boundary agreement (saee above) will usually do all that is needed.

For the sorts of issues which arise in practice, and on which we can offer advice, please see our Boundaries page.  If you’d like a quick response, to see whether we can help, please see our Initial enquiry page.

Click to go to our Initial enquiry page. Other pages which may help you:  Adverse possession, Restrictive covenants. 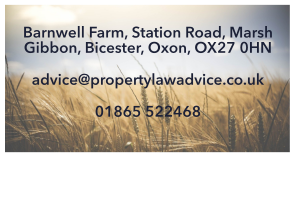